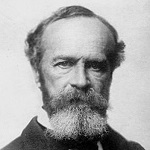 In December of 1906, William James delivered a series of eight philosophical lectures at the Lowell Institute in Boston. His topic was pragmatism, which he described as “a new name for some old ways of thinking.” In his final lecture, James discusses the relationship between pragmatism and religion. As a pragmatist, James rejects the philosophical idea of a rational unity within the universe, along with the religious dogma that the world will inevitably be saved.

From the perspective of pragmatism, the world is “pluralistic,” which essentially means that it’s made up of a lot of moving parts, that the world’s salvation depends on our ability to cooperate with other individuals and work toward the possibility of justice, unity, and reconciliation. James is personally open to the reality of God and other “superhuman forces” that are also at work in the world. However, he envisions and promotes a “pragmatistic or melioristic type of theism.”

James asks us to imagine that the “world’s author” allowed us to choose  whether we wanted to participate in a world that offered no guarantee of safety and security:

“I am going to make a world not certain to be saved, a world the perfection of which shall be conditional merely, the condition being that each several agent does its own ‘level best.’ I offer you the chance of taking part in such a world. Its safety, you see, is unwarranted. It is a real adventure, with real danger, yet it may win through. It is a social scheme of co-operative work genuinely to be done. Will you join the procession? Will you trust yourself and trust the other agents enough to face the risk?”

The decision to wholeheartedly and clearheadedly embrace life as a true adventure requires unmitigated faith—faith in ourselves, faith in our fellow human beings, and for many of us, faith in God. The abundant life does not require rational evidence that each of our ventures will be successful. And it doesn’t necessarily require a religious belief that everything will work out in the end.

As we try to make the world a better place for ourselves, our families, and our communities, we can find evidence that some things are improving. There is always hope. But it’s often easier to make the case for pessimism, that goodness cannot overcome evil.

For me personally, I see more than enough evidence that our flawed world provides the necessary conditions for ultimate joy and fulfillment. But I become distracted by opposing evidence, by vexing problems that I can’t control. I begin to lose heart, to doubt that I’m capable of doing anything substantial to combat evil.

But I need to be more relentless in simply doing what I can. This often means the willingness to take a “piecemeal approach” to my daily work. I can’t wait until everything in my life is lined up in perfect harmony, ready for a smooth push to the end. I embrace the challenge of doing my “level best,” working with others within the limits of my power and circumstances.